Posted by Margrethe Winther-Nielsen on 22 May 2018

How to safely recycle plastic waste into new food packaging

Due to the explosive population growth and our way of living, it is no surprise that we are running out of resources. For decades, we have manufactured products, used them and discarded them. Large amounts of valuable resources – many reusable – have been lost through our waste.

Two years ago, the European Commission decided to implement a Circular Economy Action Plan. What this means is that European businesses will have to think about how they design products and do business from now on. As part of this action plan, the EU Commission adopted a new set of measures, including an EU Strategy for Plastic in a Circular economy in January 2018.

Further, the EU ambassadors have recently endorsed the provisional agreement on amending four EU Waste Directives. This new legislation will contribute to the creation of a circular economy.

‘When designing any product, our headline should be, “How can we ensure that our product as a whole – or different parts of it – remain into circulation, never ending up as worthless waste?”’

In a circular economy, it should pay off to repair a product. It should be possible to split it into parts, clean it and assemble it again. Parts may also be used in another product, or materials can be recovered and included in new ones.

Circular economy is also about changing our view on ownership. It will gradually become more common to lease a product, and for a manufacturer to sell a service rather than an object.

The European Commission expects that introducing a circular economy could bring about a net savings of 600 billion Euros per year.

How can we ensure that our products – or their different parts – remain in circulation?

The answer is simple: we must avoid problematic substances, especially substances of very high concern. These include carcinogenic and mutagenic substances and substances toxic to reproduction. These kinds of substances prevent us to close the circle as they end up as worthless waste eventually.

The next question is, ‘How do I know which substances are problematic? Is there a list somewhere?’ If you’re not an expert on chemical substances, engage the help of someone in-the-know to handle this for you.

A risk-screen tool, such as the one we developed, allows the comparison of the human and environmental risks of several alternative substances for a specific product. The different substances are rated according to their estimated risk, providing an easy way for your business to transit towards a circular economy. Link up with us to explore more. 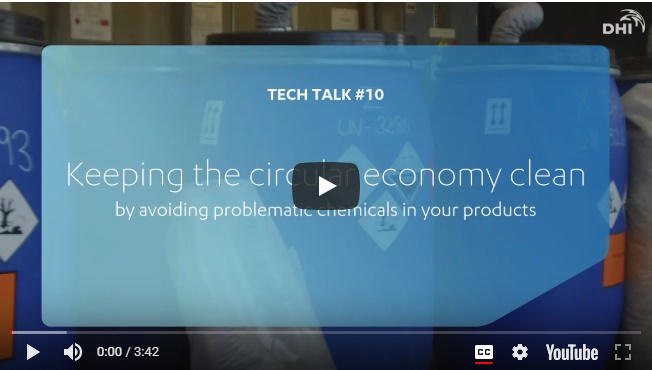 Senior Researcher, DHI Denmark - Margrethe’s career at DHI has spanned 27 years, mainly within the department of Environment and Toxicology. She is well-versed in integrating knowledge on health and environmental safety in working with substitution of chemicals. An expert in REACH, Margrethe has participated in producing several EU technical guidance documents. Her knowledge has come into play in the ongoing EU-funded NanoPack project on the development of new novel packaging systems based on nanotechnology.

How to safely recycle plastic waste into new food packaging