Wildfires and their effects on river basins: What you didn’t know

Posted by Elias Moussoulis on 24 August 2017

How machine learning can help fuel decisions in flood management

How do we balance lithium mining with the environment? The answer is digital

Five interesting facts about wildfires and their effects on river basins:

Just like floods, wildfires are natural disasters (for instance, due to lightning strikes and sun heat) and therefore an integral part of many terrestrial ecosystems. Nonetheless they are more often started by human factors, particularly human carelessness. Four out of five wildfires are started by people.

2. What are their effects?

Wildfires affect the interactions between physical, chemical and biological, biotic and abiotic components of terrestrial ecosystems.

Wildfires change the infiltration properties of soil and reduce the amount of interception materials (canopy, litter, duff and organic debris) that protect it from raindrop impact and slow runoff. Combustion converts the litter and duff layers into ash and charcoal, which produce small soil particles that can seal soil pores.

Because surface roughness is significantly reduced, the subsequent hydrological response to the normal precipitation regime is often a sudden and dramatic increase in surface runoff velocities, the size of peak flows and ultimately water discharge at the basin outlet. Mean annual runoff after the wildfires has been measured to be increased up to 3.5-fold.

In addition, rainfall in semi-arid and mountainous systems with rocky and thin soils is often caused by convective storms that produce high-intensity episodic rainfall, which in turn may trigger large floods. Flash floods have become more severe during the last decades, especially within the rapid expansion of Wildland–Urban Interface observed, for example, in Mediterranean countries. 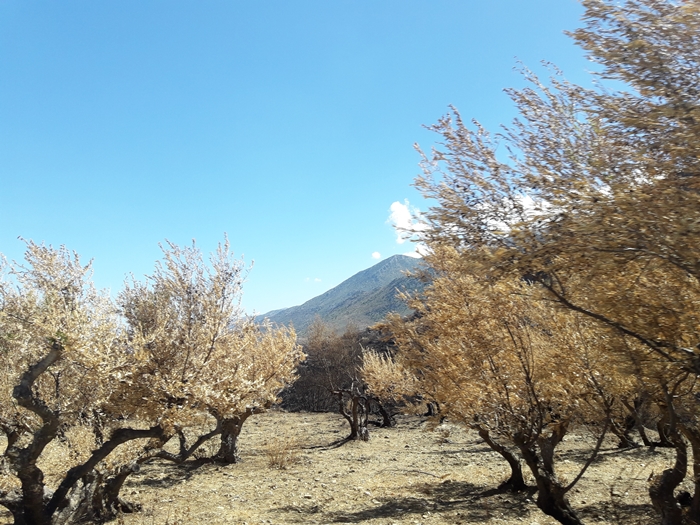 Burnt olive trees as a result of wildfires. © DHI

3. What is the period after a wildfire where there is high risk of flooding and erosion, and how long does it take for the ecosystem to recover?

Most studies have identified the first one to three post-fire years as the critical period for high runoff and erosion risk, with recovery to pre-fire rates generally within five years. However, in dry areas, such as Mediterranean shrub lands, much higher runoff and erosion rates are being documented five to ten years after the fire.

During the last decades, an increase in the number and size of wildfires has been observed in arid and semi-arid lands such as the Mediterranean area, California in the US, Australia and elsewhere. This change was attributed to land abandonment and afforestation of former agricultural land, as well as to the influence of climatic changes and an increase in the presence of certain shrubs, which are invasive and highly flammable.

The frequency and intensity of landscape-scale disturbances such as wildfires are expected to increase in the future as a result of anticipated climate changes and past land management practices.

These disturbances can produce dramatic changes in hydrological responses that can pose risks to human life, infrastructure and environment. Hence, it will be increasingly important to be able to assess rapidly and effectively pre-post wildfires changes and relationships in hydrology and to apply these assessments to evaluate such risks.

5. What are the obstacles for studying the impact of wildfires and what can be done?

The lack of observed data (such as measured stream and river discharge) before and after wildfires is crucial in studying the impact of wildfires. In this respect monitoring programs, models, and fire and water-related DSS with early warnings and immediate response plans can help.

You may also be interested in… a case story about river basin and coastal management in Central Greece, where we deployed flood and hydrological models as well as created an early warning and forecasting (DSS) to help a client in their water management measures.

Country Manager, DHI Greece | Elias is a skilled hydrologist with more than 15 years of experience in water modelling and related activities. As country manager of DHI’s representation in Greece and Cyprus, he heads the region’s business development within the areas of water resources, marine and coastal engineering, urban networks, environmental and ecological software modelling.

How machine learning can help fuel decisions in flood management

How do we balance lithium mining with the environment? The answer is digital